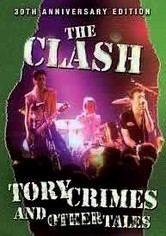 2007 NR 2 discs
Hosted by Clash drummer Terry Chimes and the band's road manager, Johnny Green, this insightful documentary -- featuring full-throttle performance footage -- profiles groundbreaking British punkers the Clash. From detailing the making of the group's eponymous debut album to chronicling a storied career spanning three decades, the retrospective is must-see viewing for acolytes of one of rock's most enduring acts.