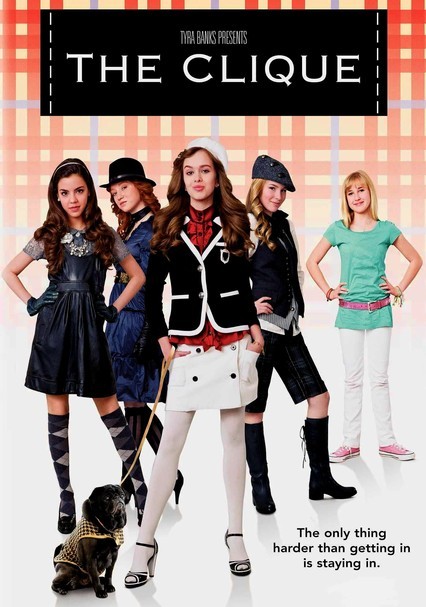 2008 PG 1h 27m DVD
The leader of an arrogant group of privileged schoolgirls, Massie Block (Elizabeth McLaughlin) finds her life takes an unexpected turn when her parents' friends -- a middle-class family with a self-assured teenage daughter, Claire (Ellen Marlow) -- move into the Blocks's guest house. In the tradition of Mean Girls, this direct-to-video teen comedy is based on the best-selling book series by author Lisi Harrison.

ComedyDramas Based on Contemporary Literature

Parents need to know that this DVD based on the popular Clique book series by Lisi Harrison intends to make light of tweens' obsession with wearing the right clothes in order to fit in. The fashions themselves, the quest to achieve them, and the rude behavior that surrounds those who have them are all glorified. The music thumps a little louder and the shots are a little slicker when these 12-year-olds are parading down the school hallway in their designer duds.

These seventh graders have never been kissed, but they obsess over older boys, even scheming to win a boy's affection by jumping out of a cake, scantily clad.

Rude behavior and insults could be considered emotional violence to some.

Girls call each other "bitch," among many other insults. Also "hell," "pissed."

The message here, and parents might not be happy to hear it, is: Kids these days are smarter and savvier than adults might realize -- and can be much meaner too.

Label worshipping to the extreme. From Prada, Fendi, Micahel Kors, Missoni and BCBG to the frowned-upon Gap and Old Navy, many mentions and much ado about clothing. Though she does not have the money to dress like the other girls, Claire lies, wheedles and takes donations from others to get the status symbols she thinks she needs.

Parents have cocktails at a party.