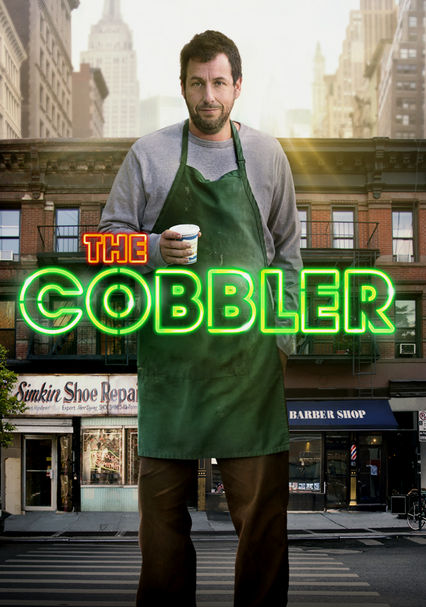 2015 PG-13 1h 38m Blu-ray / DVD
New York shoe repairman Max Simkin has become weary of his drab existence when he discovers that an old stitching machine in his shop has magical properties, enabling Max to fully inhabit the lives of his customers simply by trying on their shoes.

Parents need to know that The Cobbler is a quirky dramedy with fantasy elements starring Adam Sandler as a fourth-generation cobbler on Manhattan's Lower East Side. Unlike many of Sandler's other movies, this isn't a lowbrow comedy with sports and bodily fluid jokes: It's a story about birthright, community, and what it takes to understand someone else's life. But there's also a lot of casual violence that's occasionally depicted humorously but is no less disturbing. People are stabbed, choked, kidnapped, tortured, and killed. A man almost impersonates a woman's lover to have sex with her, and the language is occasionally strong, with "s--t," "bitch," and "a--hole" peppered here and there.

Max and Jimmy admire a model's body. When Max gets the chance to impersonate the model's boyfriend, he nearly showers/has sex with her but stops himself.

Characters are mugged, beaten, tortured, jolted with electricity, stabbed, and killed. A woman makes it clear that her ex had been physically abusing her. One of the people Max can turn into is dead, so he looks like a zombie and scares people when he's in that guise. While disguised as a woman's lover, Max almost takes advantage and has sex with her.

The idea of walking in someone else's shoes to learn empathy (in this case, literally) is a worthy one, but the positive potential of the movie's message is largely undermined by the fact that, for much of the movie, Max uses his special ability to commit crimes and do other ugly things (including taking advantage of stereotypes).