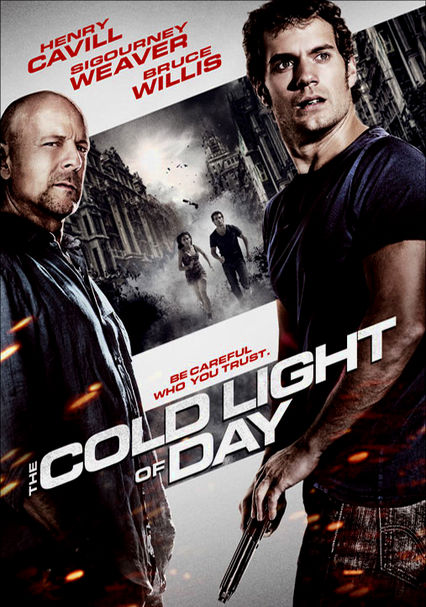 2012 PG-13 1h 33m Blu-ray / DVD
When his family falls prey to kidnappers while on holiday in Spain, Wall Street whiz kid Will Shaw frantically sets out to get them back -- but discovers that the trail leads back to his own father and the secrets he keeps.

Parents need to know that The Cold Light of Day -- a kidnap/rescue thriller set in Madrid -- has lots of shooting and car crashes, and characters are beaten up quite frequently (and there are deaths), but there's not much blood. Language is sparse, but contains two uses of "s--t." Though there's no real nudity or sex, there's a subplot about an extramarital affair and its consequences. There are also a couple of shots of the main character shirtless and some supporting characters kissing. Characters drink in a background way, though in more than one instance, it looks as though they're trying to get drunk.

Many bullets are fired, but characters seem to die more often from car crashes than anything else. One main character dies, and people are kidnapped. Lots of fighting and beating people up, but not a great deal of blood. In one harrowing scene, a character tries to help a gunshot victim, first by digging around inside the wound to find the bullet, and then cauterizing the wound with a hot spoon -- though most of this gory stuff happens just off screen.

Infrequent language includes one "f--k" and a few "s--t"s, as well as "bitch," "goddamn," "hell," and "oh my God." One character apparently says "f---ing," but the word is drowned out under the noise of a gunshot.

Nobody learns much of anything here. After his adventure -- and causing untold amounts of violence, wreckage, and death -- the character is offered a job (so there are no negative consequences).

Quick shots of a Coca-Cola can, a BlackBerry mobile device, and a MasterCard.

A family drinks wine at dinner. One character gulps down a glass after hearing some bad news. A minor character, a nightclub owner/manager, drinks lots of hard liquor every time he's on screen.