The Complete History of America 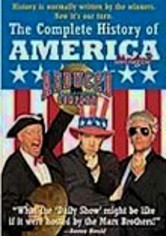 The Complete History of America

2005 NR 1h 49m DVD
Known for compressing Shakespeare's plays into hilarious one-minute versions for the attention-impaired, the Reduced Shakespeare Company focuses on American history in this fast-paced sketch comedy. Moving breathlessly from the discovery of the New World to George W. Bush's presidency in 90 minutes, the three-man troupe covers the question of who really discovered America, the complexities of Watergate and more -- all with hilarious brevity.