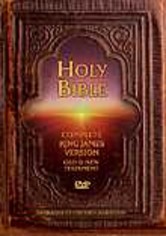 2003 NR 2 discs
Emmy Award-winning narrator Stephen Johnston takes viewers on a transformative journey through what may arguably be the most epic and sweeping history ever captured in literature: the Bible. Filmmakers translate the King James version to the screen in living color, producing 72 hours' worth of film using photographs, graphic renditions and the text itself.