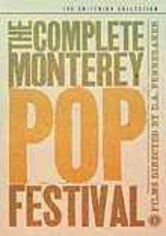 1967 NR 3 discs
In 1967, cinematographer D.A. Pennebaker -- famous for his cinema verite style -- was in California to capture the searing performances of the likes of such icons as The Mamas and the Papas, Otis Redding and The Who on the Monterey International Pop Festival stage. Special features in this director-approved collection include substantial concert and behind-the-scenes footage.