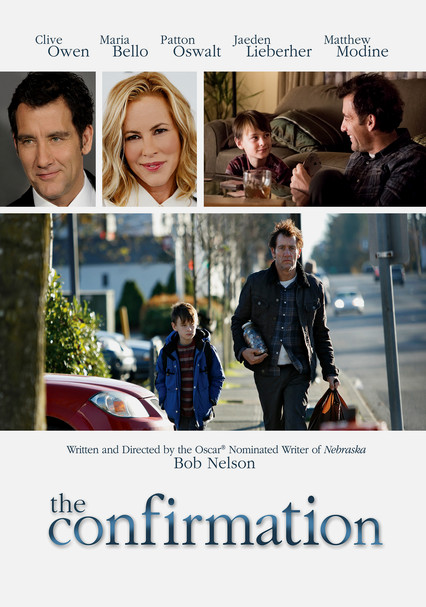 2016 PG-13 1h 41m DVD
When boozy carpenter Walt is offered a job, he thinks his bad luck may be changing -- only to find that someone has pilfered his toolbox. As Walt sets out with his estranged young son to hunt down the culprit, the pair unexpectedly form a bond.

Parents need to know that The Confirmation is a serious film that deals with the struggles of an out-of-work, alcoholic deadbeat dad (Clive Owen) who's desperately fighting to remain sober so he can stay in his 8-year-old son's life. The boy, who watches his father succumb to alcohol withdrawal while his mom is away for a weekend, takes charge of his father's care, even though he barely understands what's going on. A sense that the boy might not be safe in the dad's company quickly gives way to an ultimately hopeful story about the father's commitment to gradual redemption, one human step at a time; his journey includes themes of empathy, courage, and kindness. That said, although the dad eventually becomes more responsible, his lapses in judgment include trying to steal back some stolen property and calling his ex-wife's new husband a "puss." Other language includes infrequent use of words like "s--tty" and "ass," and there are scenes involving punching and a gun being pulled. Reference to a character using drugs.

Two men punch another when something is stolen. A man pulls a gun on Walt when he accuses him of stealing his tools but puts it down when he sees Walt is no real threat.

Try your best. It's never too late to straighten out your life. Appreciate what others do for you, even if what they do isn't ultimately all that helpful.

Walt is an alcoholic going through withdrawal. A minor character admits he uses "meth." A boy matter-of-factly refers to his "passed out" dad.