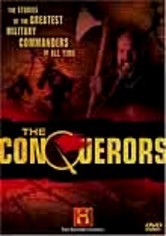 2005 NR 3 discs
Former U.S. Marine Capt. Dale Dye is your host on a long walk through time in this History Channel series, presenting a documentary tour de force on the world's greatest battles and the fearless men who fought them -- from King David and El Cid to Napoleon and Julius Caesar. Moving through history, the film also chronicles the developments in man-made technology that made the conquering of foreign lands ever easier to achieve.