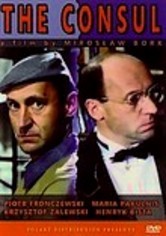 1989 NR 1h 44m DVD
A con man (Piotr Fronczewski) gets out of jail and is soon up to his old tricks. He starts small, but his grifts quickly grow more elaborate and far-reaching, until he's entangled all manner of local politicians and government ministers in his chicanery, culminating with his grand impersonation of an Austrian diplomat. Miroslaw Bork's dry-witted Polish comedy won the Best Director award at the San Sebastian International Film Festival in 1989.