The Corporal's Diary: 38 Days in Iraq 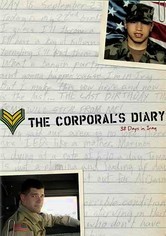 The Corporal's Diary: 38 Days in Iraq

2008 NR 1h 32m DVD
This poignant documentary shares the video journal kept by 22-year-old Cpl. Jonathan Santos during the 37 days he served in Iraq before being killed in a bombing on October 15, 2004, along with several other soldiers. Jonathan's mother, Doris Kent, received the journal along with the rest of his belongings after his death, and the film follows her subsequent meetings with family members of other soldiers who made the ultimate sacrifice.