The Corrs: Live in London 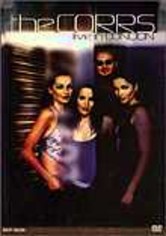 The Corrs: Live in London

2001 NR 2h 9m DVD
Blending traditional Irish music with lush contemporary pop/rock, The Corrs have emerged as a major force on the landscape of American popular music. With hits such as "Runaway" and "Breathless," the band has shown their knack for bright harmonies and infectious arrangements. This concert showcases the group on the last leg of their 2000 European tour. Tunes include "Happy Christmas," "Dreams," "Radio" and "Breathless."