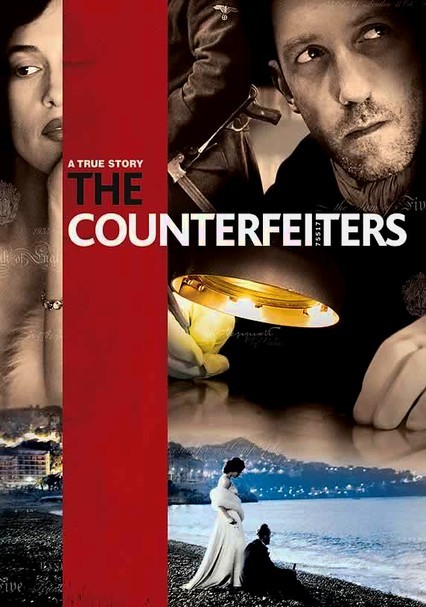 2007 R 1h 38m Blu-ray / DVD
During World War II, Jewish master forger Salomon "Sally" Sorowitsch is shielded from the atrocities of the concentration camps by agreeing to create counterfeit Allied currency for the Nazis. But soon, his conscience begins to gnaw at him.

DramaMilitary & War DramasDramas Based on the Book20th Century Period Pieces

Parents need to know that this subtitled drama, which is based on a true story, deals with mature themes and includes difficult images of cruelty and murder in a World War II concentration camp. Violence includes beating, fighting, and shooting, with visible blood, bruises, and other signs of brutality. Prisoners are starved, and guards are nasty. Two brief scenes show naked or almost naked women (from the backs). Language includes "f--k," "s--t," and derogatory uses of "Jew."

Kissing leads to a passionate embrace on bed (nipples visible beneath woman's sheer bra); post-sex, she wears a slip and takes money he's left on the dresser (though she insists, "I'm not a..."). In another scene, kissing leads to sex (off-screen); post-sex scene shows woman naked on bed, her bottom and back visible; later, she drops a sheet to seduce her partner again, and you see her naked from the back, with breasts in outline, as well as a drawing of her naked. Some cleavage shots.

Most of the film is set in the Sachsenhausen concentration camp, where violence is always threatened. Specific instances include beating, slapping, kicking, slamming heads against walls, whipping, throttling, shooting (bloody spatter, exploding head). Several scenes show a young prisoner suffering from tuberculosis (pale, deathly, coughing). A Nazi guard maliciously pees on a prisoner, who in turn smashes a sink in frustration. Almost all prisoners show effects of abuses, including bruises and bloody cuts.

The hero is a criminal (a counterfeiter), who seems relatively moral compared to the Nazis, who are generally terrible: cheats, bullies, snobs, torturers, and killers.

Frequent cigarette smoking, especially by the hero. Drinking in a gambling lounge and in a flashback bar scene. When a prisoner makes a secret deal with a guard to get TB medication, bottles are visible.