The Court of Last Resort 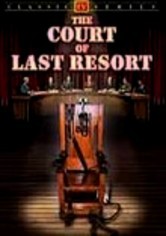 The Court of Last Resort

1957 NR 1h 42m DVD
Staffed by the era's top law and criminology experts, "The Court of Last Resort" attempted to expose the wrongly accused and unjustly convicted criminals of the 1940s and '50s. Intervening where the justice system was perceived to have failed, the series uncovered actual cases for dramatic reenactment. This four-episode collection from the crusading show features the trials of Clarence Redding, Conrad Murray, George Zaccho and Jacob Loveless.