The Covenant: Brotherhood of Evil 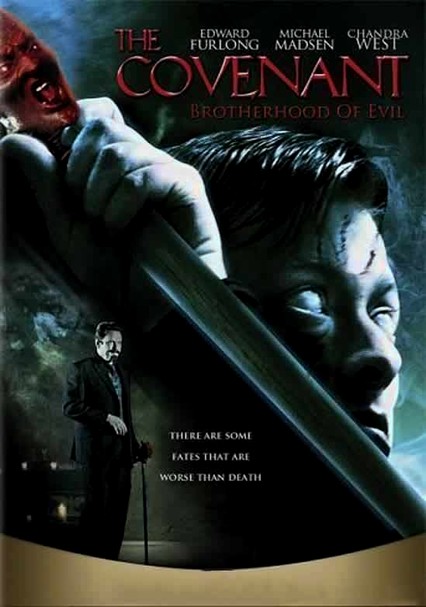 The Covenant: Brotherhood of Evil

2006 NR 1h 30m DVD
Losing a big promotion at work is only the start of bad luck for David Goodman (Edward Furlong), a young public relations executive who's attacked in the street and blinded shortly thereafter. But with the arrival of a mysterious stranger named Guillermo List (Michael Madsen), David finally has the chance to regain his eyesight and get his career back on track. All it will cost him is his soul ...

Parents need to know that the movie posits four handsome prep school students as descendents of witches, with destructive powers and arrogant attitudes. The film's violence includes plenty of bodies slamming against/through walls, as evidence of the "force" the boys wield, as well as cars flying off a cliff, crashing, and exploding, and spells that send girls into convulsive comas. A dead body alarms a policeman who discovers it in a car. A girl is threatened by a ghostlike figure in the shower. Prep school-aged characters drink, and talk about the power as addictive (alluding to drugs, sort of). A mother smokes and drinks liquor to show her displeasure with her life married to a selfish male witch. Some profanity.

Girl in a shower scared by foggy shape (her breasts remain unseen); in boys' locker room, shots of naked butts in the shower; passionate kissing in car by primary couple.

Fights between witch-boys are brutal (slamming through walls, ceilings, and stacks of bottles, tossing farm tools, throwing fireballs), but unbelievable (cheesy effects); estate caretaker aims gun at intruders; girl assaulted by spiders; girl suffers hives and unconsciousness under a spell; barn burns during big showdown scene, with bodies smashing into each other and various walls.

Witch-boys are arrogant and selfish, save for one, who teaches others to be careful with their gifts (though he has to beat one apparently to death in order to impose this lesson).