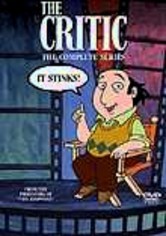 1994 TV-PG 3 discs
This irreverent animated comedy from producer James L. Brooks takes viewers into the world of acerbic New York film critic Jay Sherman (voiced by Jon Lovitz). Pudgy and balding, Sherman is the host of Channel 67's "Coming Attractions," most of which fall far short of his very high standards. The curmudgeonly critic is constantly trying to balance his distaste for popular films with his desire for success and approval.