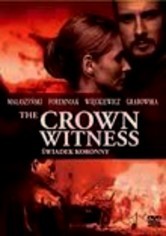 2007 NR 1h 37m DVD
Preparing to testify against his former associates, reformed mobster Marcin Kruk (Pawel Malaszynski) risks everything when he agrees to a tell-all interview with an ambitious journalist. But when a revelation from the reporter's past surfaces, Marcin learns he's not the only one whose life is on the line. Directed by Jacek Filipiak and co-starring Malgorzata Foremniak and Robert Wieckiewicz, this riveting crime thriller is based on true events.