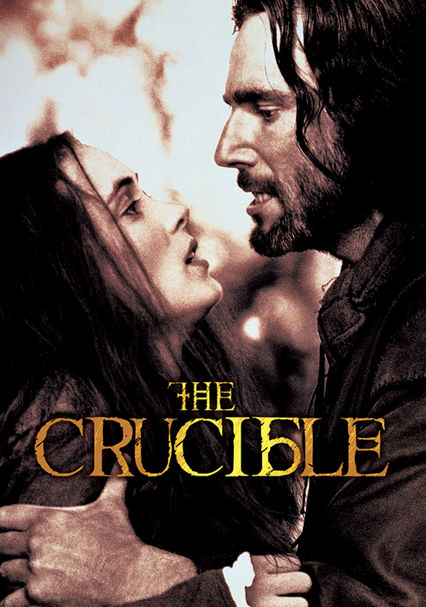 1996 PG-13 2h 3m DVD
Playwright Arthur Miller's parable of the 1950s anti-communist crusade (thinly veiled here as the Salem, Mass., witch trials of 1692) receives lush treatment in this Oscar-nominated film adaptation from director Nicholas Hytner. After being spurned by her married lover (Daniel Day-Lewis), young Abigail Williams (Winona Ryder) stirs up a frenzy of hysteria and fear with accusations of witchcraft. Joan Allen earned an Oscar nod for her role.

Parents need to know that The Crucible is an intense 1996 exploration of the Salem witch trials based on Arthur Miller's play. It delves into the basest human instincts: violence, self-protection, lust, hypocrisy, territorialism, paranoia, and crowd mania. Religious fervor is shown in its worst light, with so-called sinners accusing others of sin. Religious and political leaders, as well as judges and neighbors, prove to be corrupt and self-serving. Expect brief nudity: From afar and in fog, a girl's buttocks and breasts are briefly shown. A married man discusses a past affair with a young single woman. They kiss, then he pushes her away violently. There is talk of hanging as punishment for refusing to admit to witchcraft, and hanging is briefly seen. Servants are beaten and smacked. A man is tortured and ultimately crushed to death when townspeople place heavy rocks on his chest to induce him to inform on others. A girl smashes a rooster to the ground, then smears her face with its blood. The 17th-century language echoing Salem witch trial transcripts may pose a challenge for young modern viewers.

Abigail tries to reignite a past affair with Procter. She kisses him passionately, but he pushes her away. A girl's buttocks and breasts are shown briefly and foggily through dim light.

This world is merciless and violent. With no evidence, so-called witches and servants of the devil are rabidly pursued, jailed, and hanged. Abigail and others bring false charges of devilry and witchery against innocents to wipe their hands clean of lesser offenses. A man is tortured and ultimately crushed to death when townspeople place heavy rocks on his chest to induce him to inform on others. Alleged purveyors of witchcraft are threatened with hanging, and hanging is briefly shown. Servants are beaten and smacked. A woman kisses a man and he pushes her away, to the ground. Girls dramatically pretend to faint and fall to the ground. A girl smashes a rooster to the ground, then smears her face with its blood. Abigail angrily hits her younger cousin.

People lie and accuse others to save themselves. Honest people are sometimes punished rather than rewarded for their honesty. People sometimes risk death to stand up for their principles.