The Crusades: Crescent and the Cross 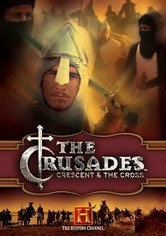 The Crusades: Crescent and the Cross

2005 NR 3h 0m DVD
Taking on the gargantuan task of chronicling two centuries of conflict, this fascinating documentary begins in 1096 A.D. -- the year Christian soldiers seized the city of Jerusalem from Muslim forces. The program follows the Crusades through the 13th century via a stunning blend of theatrical reenactments, computer-generated imagery and on-location footage. Produced by the History Channel, the show is thought provoking and educational.