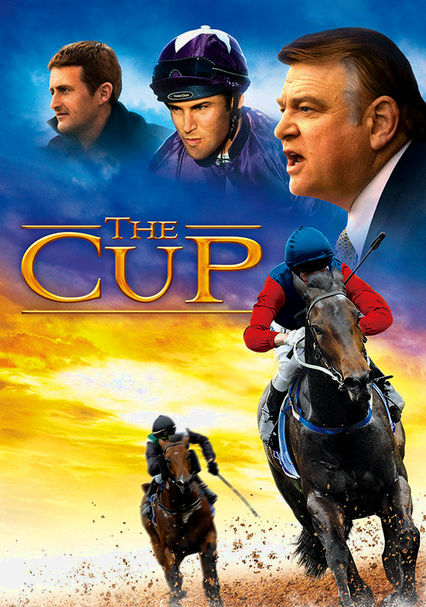 2011 PG 1h 37m DVD
When his brother suffers a fatal fall seven days before Australia's prestigious Melbourne Cup, a young jockey gives everything he has to make history. The result is an inspiring tale of love and loss based on actual events.

Parents need to know that The Cup is a sports movie based on real events that occurred in 2002. Horse racing is a major sport in Australia; "The Cup" refers to the Melbourne Cup, the country's most important annual horse race. Only a few scenes actually portray specific races; the primary focus is the personal stories of a famed Australian jockey, his family, and the Irish trainer who comes to Melbourne for the big race. Heavy dialects may trip up some viewers. The film, which is sometimes sad, contains actual footage of a racing tragedy and one disturbing on-camera racing accident. (Spoiler alert: Deaths occur, as do a funeral and a lengthy hospital sequence in which a life hangs in the balance).

A couple is shown in bed together. A married couple kisses.

Two disturbing horse-racing accidents occur; one is shown in news footage of an actual event, and the other is reenacted. (Spoiler alert: In both instances, the jockeys suffer fatal injuries.)

Promotes perseverance, grace under pressure, bravery, close family ties, and striving for excellence: "Being a champion isn't about winning. It's about toughing it out."

Qantas Airlines and Godolphin Racing and Stables are mentioned, as are numerous Australian products and services including Shannons Insurance, Goldner Transport, and 3AW.

Characters are briefly seen drinking alcoholic beverages both at home and in a bar.