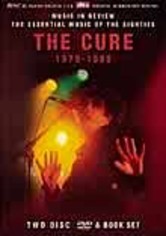 1979 NR 2 discs
One of the most influential bands of the 1980s, The Cure has achieved a coveted place in the pantheon of pop. This video mixes rare archival footage and discussions with well-known music critics to evaluate the impact of every album the Goth rockers produced from 1979 to 1989. Connoisseurs won't want to miss hard-to-find live performances of such favorites as "The Top," "Bananafishbones" and "Piggy in the Mirror."