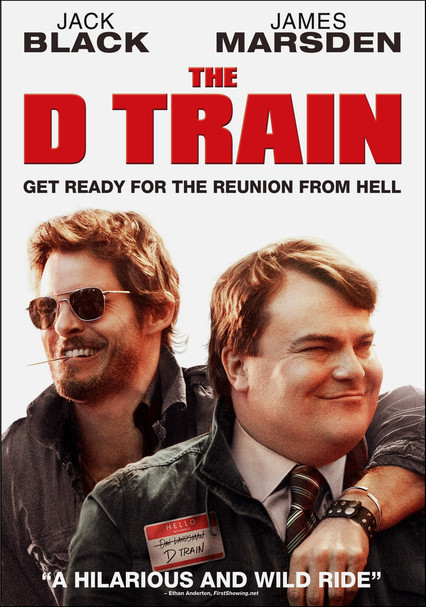 2015 R 1h 41m Blu-ray / DVD
Being committee chairman for his high school class's 20-year reunion provides perpetual loser Dan Landsman with a golden opportunity to prove his coolness. But it all hinges on persuading semifamous ex-classmate Oliver Lawless to attend.

Parents need to know the The D Train is a mature dramedy starring Jack Black and James Marsden that has a heavy emphasis on sex. The key conflict comes when a seemingly happily married man is seduced by a bisexual acquaintance and later has trouble coming to terms with their unexpected encounter. That leads to lies, which build into bigger lies, and soon he's buckling under the strain of maintaining a huge deception. There's also a lot of drinking, smoking, and drugs, as well as plenty of swearing ("s--t," "f--k," and more) and a few sex scenes, including the one between the two men and another energetic one between the married man and his wife. Nudity includes quick glimpses of bare bottoms and breasts. This is definitely a film for grown-ups and older teens.

A key part of the film is one of the main characters' fluid sexuality; at one point he seduces a happily married man. They kiss, and there's a brief shot of them moving together. The husband is later seen having enthusiastic sex with his wife, with plenty of noise and motion. A brief moment in a strip club includes a few bare breasts, and there's a quick shot of a man's butt as he gets out of bed. Sometimes-frank discussion about sex. A nervous teen wants to ask his dad some questions about sex, but instead he gets a pretty graphic lesson from a houseguest.

Dan learns a little too late that a few small lies can snowball into an impossible-to-control situation. Honesty is the only way out, but it can't always repair all the damage.

Friends spend two nights out on the town in an alcohol-and-drug-fueled extravaganza that includes liquor, cocaine, cigarettes, strip clubs, and more. Some characters smoke throughout the film, and one later gets very drunk at an event.