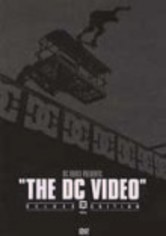 2004 NR 0h 50m DVD
This unique video shines a spotlight on one of the most dynamic teams in skateboarding. More than three years in the making, the film was shot on location around the world and features the talents of Danny Way (who breaks two world records in one run), Colin McKay, Rob Dyrdek, Josh Kalis, Stevie Williams, Anthony Van Engelen, Brian Wenning, Robbie McKinley, Ryan Smith and many others. Also look for special guest Christopher "Big Black" Boykin.