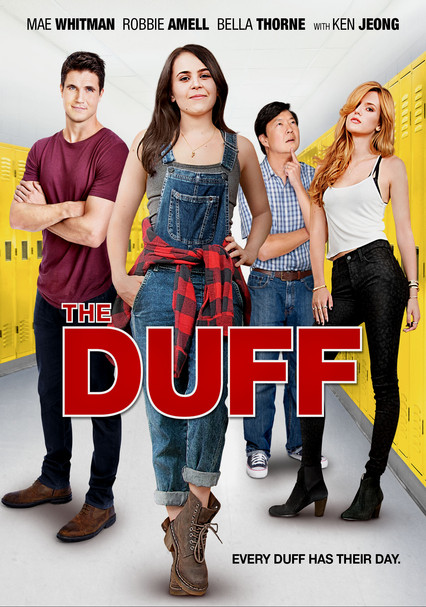 2015 PG-13 1h 41m Blu-ray / DVD
A smart high schooler's world comes crashing down when she discovers that she's considered the Designated Ugly Fat Friend among her clique of more attractive chums. To lose the degrading label, she enlists a jock's help for a massive makeover.

Parents need to know that The DUFF is a funny, fascinating -- if quite racy -- examination of the American high school social hierarchy. Sexual themes permeate the movie; there's frank conversation about what types of people are attractive and what types aren't, especially when it comes to girls (the movie's title is short for "designated ugly fat friend"). Teen characters drink, fool around, talk about sex, and swear (including "d--k," "bitch," "s--t," and one "f--k"), and the humor and references can be crude (boys talk about "banging" girls, etc.). There's also a cruel incident of cyberbullying and lots of product placement. Stereotypes typical of high school movies are somewhat upended (some popular characters are kind and sensitive, etc.), and the main character learns that it's important to define yourself rather than letting others label you, but there's also an underlying theme about having to change who you are to succeed in romance.

Some shouting matches, plus cyberbullying: A vindictive girl makes a compromising video about a classmate go viral just to hurt her.

Nobody has the right to label you; you get to define yourself. And it's not healthy or productive to compare yourself to others. But there's also an underlying theme about needing to change who you are in order to get the object of your affection to notice (and have sex with) you, and appearance is definitely part of the equation. The whole concept of DUFFs (designated ugly fat friends) is cruel, but that's alleviated by the movie's ultimately uplifting tone.