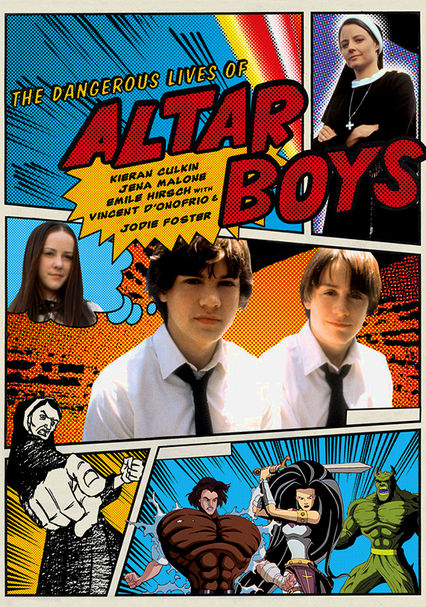 2002 R 1h 45m DVD
When a bunch of eighth-grade Catholic school students get caught drawing an obscene comic book, they seek revenge for their punishment -- and a reputation as school legends -- by planning a prank on the mean, one-legged nun who nabbed them.

Parents need to know that this film is not for kids. The protagonists are surrounded by difficult situations (one has alcoholic parents and is humiliated in school, another is a victim of an older brother's sexual abuse, a girl is suicidal and scars on her wrists are shown), and lack of parental involvement leads to substance abuse of all types, as well as copious amounts of swearing. Young teens pull dangerous pranks (such as cutting down telephone poles with chainsaws), break into wildlife parks and abandoned houses, and blatantly flout authority figures. These characters are rarely punished, and expulsion is treated lightly. Although characters draw obscene pictures and speak graphically about sex, their real-world experience is very limited, and little more than making out and touching above the waist is depicted onscreen. Animated sequences include a lot of comic book violence, and there is a deadly mauling by a mountain lion. There are also several conversations about masturbation.

Very frank sexual discussion, innuendo, and some obscene drawings. Characters engage in little more than making out and touching above the waist. One character deals with sexual abuse by an older brother.

Lots of animated violence, two fist fights, and one character is mauled to death by a mountain lion.

These characters are not to be taken as role models by anyone, but they're not necessarily bad people.

Young boys (14) drink without consequences, smoke, and do drugs.