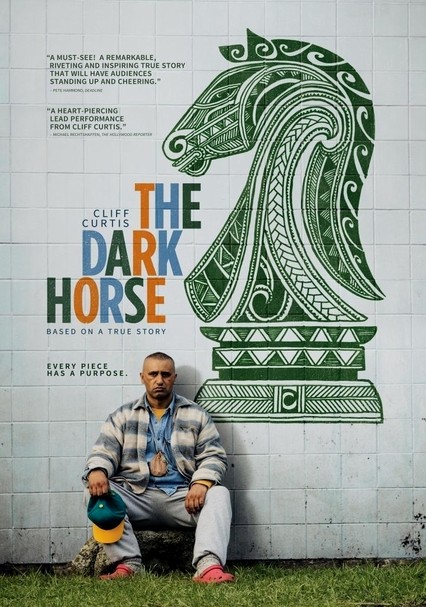 2016 R 2h 4m DVD
Genesis Potini is a forgotten man, locked away for years battling bipolar disorder. Finally free and hoping to help others, the imposing Maori hulk and chess genius inspires tens of thousands of troubled youth to embrace the game of kings.

Parents need to know that The Dark Horse is based on a true story that's rich with empathy and heart, though balanced by a harsh reality. Expect intense scenes that show a man battling with mental illness, poverty, and personal demons (both internal and external). It also features scenes of kids drinking and using drugs (weed), as well as many menacing moments as a teen boy is slowly inducted into biker-gang life (there are beatings and more). Also some swearing, including "f--k" and "s--t."

A man is beaten with a pipe. Two men break into someone's home; the ringleader kicks the residents and scares a small child. A few scenes show a teenager with obvious bruises on his face, clearly post-beating. A man completely loses it in a van, destroying the windshield. Soon after, he storms into a party and nearly gets into a big fight with another guest. Other sequences have an overall menacing quality as Genesis battles both his inner demons and equally scary real-life ones who don't have his or his nephews' best interests at heart.

A person, no matter who they are or how troubled they might be, needs a purpose. Also, redemption comes in many forms. Empathy is a strong theme.

Young boys drink beer and smoke weed. A teenager is seen grabbing beers for his father and his father's friends, who appear to spend much of their time getting high and drunk around him.