The Darkness: Shadows and Light 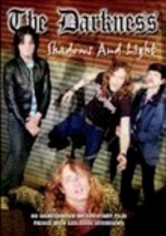 The Darkness: Shadows and Light

2004 NR 1h 0m DVD
From penniless paupers playing to "crowds" of eight people to millionaires performing in front of audiences of 375,000, this documentary traces the meteoric, rockin' rise of Darkness, a band with a chart-topping debut album and a string of awards under their belts. Find out the real story of how Darkness rocked out and injected some much-needed cabaret back into performing. Includes previously unseen footage and in-depth interviews.