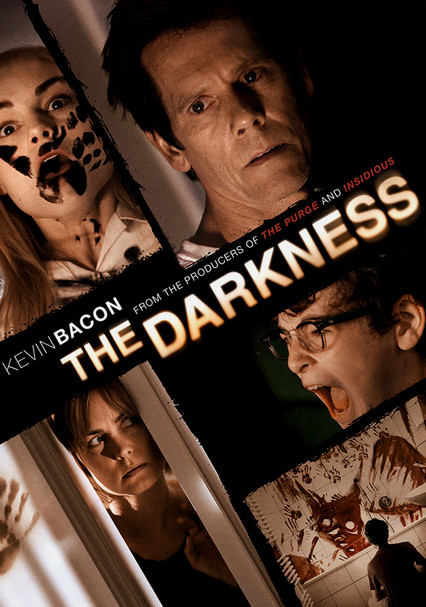 2016 PG-13 1h 32m Blu-ray / DVD
In this eerie tale of horror based on real-life events, the unsuspecting Taylor family returns from a Grand Canyon holiday, only to discover that they've brought along a malignant spirit that feeds on their fears.

Parents need to know that The Darkness is a horror movie about Native American ghosts that haunt a Caucasian autistic boy and his family, a cultural dynamic that may not sit well with all viewers. There are plenty of jump scares, as well as some blood. A room is covered with red-smeared designs on the walls and ceiling (presumably blood, but that's not certain). Family members argue, and a wall catches on fire. A married couple kisses in bed, a teen girl is shown taking a shower (no sensitive nudity), and there's flirting and talk of a husband's past infidelity. A woman's alcoholism is discussed; she buys vodka, and the bottles are shown half empty, but viewers never see her (or anyone else) actually drinking. Language includes a use of "f--k" and a couple of uses of "s--t."

Teen girl in the shower (nothing sensitive shown). A shirtless man repeatedly kisses his wife in bed, presumably trying to initiate sex, but they're interrupted. Married man flirts with other women (a past affair is discussed).

Creepy scenes and jump scares. A room with (presumably) blood smeared in patterns all over the walls and ceiling. A dog attacks a teen girl, leaving bloody marks on her arm. Small cuts from flying glass shards. Siblings fight. Mom and daughter figh. Fire in a house.

The movie briefly addresses (but doesn't dig very deep into) topics including bulimia, autism, alcoholism, and infidelity. It also acknowledges the existence of non-white cultures, but in a fairly surface (and arguably stereotypical) way.

A main character is described as an alcoholic. She buys two bottles of vodka; later the bottle is shown half empty. Characters head to the bar while in a restaurant. Characters prepare to drink alcohol while camping.