The Dead and the Deadly 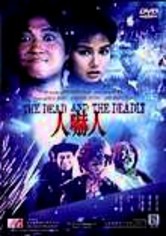 The Dead and the Deadly

1983 NR 1h 30m DVD
Wah Li lives with his great-uncle and, with his oddball friends Lai Li and Momo, helps Uncle run the local funeral home. When a new wife and her "brother" bring a body back to the village, Wai Li is suspicious. He sets out to find out how the person died, and, as suspected, things are not what they seem. This hilarious sci-fi actioner was nominated for Best Film, Best Director and Best Actor at the 1983 Hong Kong Film Awards.