The Death of Adolf Hitler 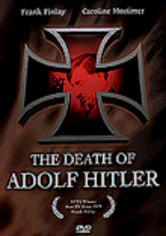 The Death of Adolf Hitler

1973 NR 1h 47m DVD
Frank Finlay received a BAFTA Television Award for his chilling portrayal of Adolf Hitler in this examination of the ruler's last days, set entirely in the bunker in which Hitler eventually ended his own life. The film imagines the paranoia that dogged him as the Third Reich collapsed, his childhood memories, his recounting of his rise to power and interchanges with confidants Eva Braun (Caroline Mortimer) and Hermann Göring (Robert Cawdron).