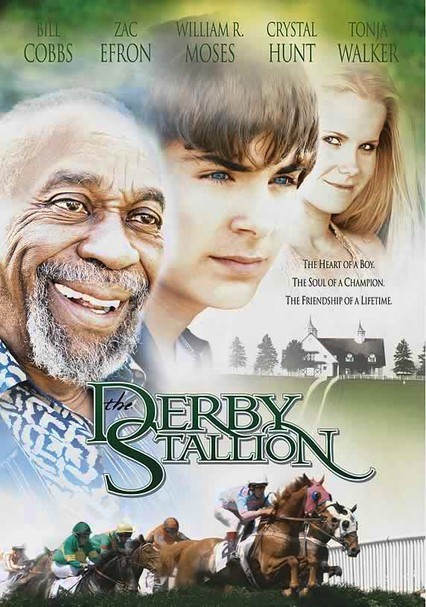 2005 PG 1h 38m DVD
When quiet 15-year-old misfit Patrick learns his friend Mr. Jones, a hard-drinking former jockey, is nursing an injured racehorse back to health, the teen helps train the animal for the State Cup -- and gains the self-confidence he never had.

Parents need to know that The Derby Stallion is a family-friendly horse tale starring Zac Efron, pre-High School Musical. Although there's almost no bad language (one use of "ass") and very little sexy stuff (a couple of kisses and some light flirting), there is some frank talk about alcoholism, race, and class. There also are some references to death, including someone falling from a horse and the death of a main character, which may be too intense for young viewers.

Patrick's parents are shown kissing and being affectionate, and there's one pretty deep kiss between Jill and Patrick.

The death of a character's loved one from falling from her horse is detailed in a flashback. The actual accident isn't shown, though you do see her body afterward. A main character dies, though it's also not shown in a violent or graphic way. A town bully threatens to beat up Patrick and acts aggressively toward him and other characters.

One character refers to another as a "horse's ass."

The strongest message is to follow your dreams and your heart, even if others think it's not right for you. There's also a strong emphasis on friendship and supporting your friends no matter what.

Houston is referred to by the other characters as an alcoholic, and he's shown drinking out of a flask. But he does own up to his problem and quits drinking. Alcohol isn't glamorized at all, and drinking is frowned upon by the rest of the characters, especially Patrick's parents, who have concerns about Patrick spending time with an adult who drinks heavily.