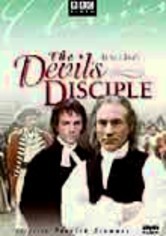 1990 NR 2h 0m DVD
The Revolutionary War serves as the backdrop for this brilliant satire penned by George Bernard Shaw. Self-professed "devil's disciple" Dick Dudgeon (Mike Gwilym) -- who long ago scorned the piety and traditional values of his mother (Elizabeth Spriggs) -- returns home when his father dies. But after the British army arrives on the scene to lynch the village minister (Patrick Stewart), Dick finds that he can't escape his moral underpinnings.