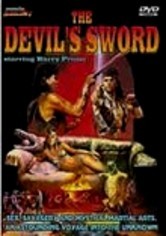 1984 NR 1h 41m DVD
There's something about the Devil's Sword, which lies deep inside Devil's Mountain, that makes evil people drool with greed. So when four warriors try to steal it, one man launches his own quest to save it. Along the way, he narrowly escapes deadly booby traps and scraps with a band of bloodthirsty crocodile men. But the true test lies in his ability to summon the gods and use the mythical sword to fight back.