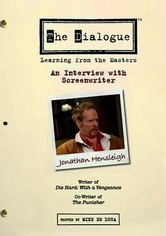 2008 NR 1h 22m DVD
After ditching his law career, Jonathan Hensleigh (Die Hard: with a Vengeance, Armageddon) went on to become a widely respected and successful action-adventure screenwriter. In this candid interview, he reveals his approach to his craft. With unwavering honesty, he talks about developing action series, discloses his real feelings on screenwriting classes and discusses how being an attorney has influenced his writing process.