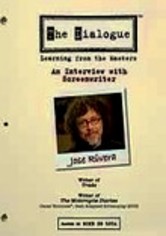 2007 NR 1h 22m DVD
Screenwriter Jose Rivera -- whose Motorcycle Diaries screenplay earned an Oscar nomination and whose credits include many TV series -- shares his methods, experiences, insights and secrets about writing for Hollywood in this revealing interview. "The Dialogue" is a series of in-depth discussions with top screenwriters, hosted by industry veteran and film fanatic Mike De Luca.