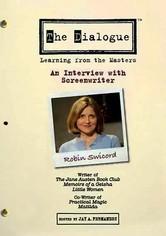 2008 NR 1h 21m DVD
Now a well-known screenwriter, Robin Swicord started out as a copywriter and playwright. In this frank interview, part of a series of discussions with top film writers, she talks about her Hollywood success. Offering an insider's insight, Swicord opens up about her experiences in the movie industry working on such films as "Little Women," "Practical Magic," "Memoirs of a Geisha" and "The Jane Austen Book Club," which she also directed.