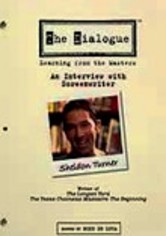 2007 NR 1h 29m DVD
In a lively interview akin to an episode of "Inside the Actors Studio," maverick screenwriter Sheldon Turner (who penned the 2005 remake of The Longest Yard) shares his best-kept secrets for playing the Hollywood game. This program is part of a series of in-depth conversations between industry professionals and more than two dozen successful screenwriters, who candidly discuss their careers and their varied approaches to the writing craft.