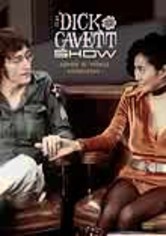 1971 NR 2 discs
In this three-episode collection of "The Dick Cavett Show," John Lennon, with wife Yoko Ono, gives his first interview after the Beatles' breakup. The couple previews two of their experimental films and promos for the songs "Imagine" and "Mrs. Lennon" during the September 1971 show. Two weeks later, Cavett airs more of Lennon's post-Beatles interview, and in May 1972, John and Yoko perform live with the band Elephant's Memory.