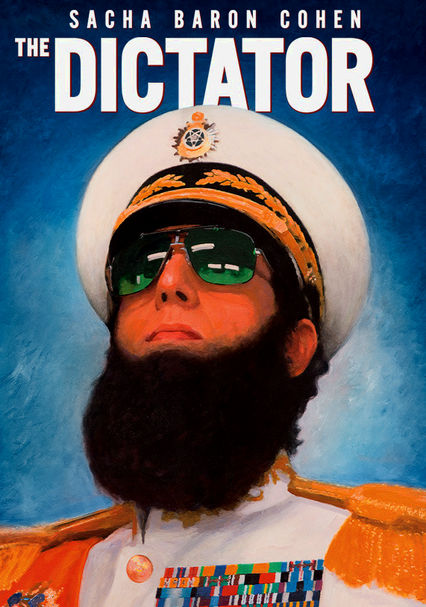 2012 R 1h 23m Blu-ray / DVD
This outlandish comedy chronicles the glorious efforts of despotic General Aladeen, dictator of the Republic of Wadiya, to oppress his people and fight democracy. Helping the tyrant maintain his rule at all costs is an all-female security force.

Parents need to know that Borat creator Sacha Baron Cohen's comedy The Dictator is extremely crass, politically incorrect, ridiculous, silly -- and quite funny. If you have a thick skin, you can't help but laugh at Cohen, who this time doesn't mine the humor found in punking unsuspecting people but instead gets guffaws by playing an extremely over-the-top dictator with campy relish. Expect tons of swearing (including "f--k" and derivations thereof, as well as many derogatory/racist terms) and sexual jokes/references, as well as topless women and a brief flash of full-frontal male nudity. As always, Baron Cohen doesn't shy away from stereotype-based humor that's likely to offend; instead, he embraces it.

Cartoonish violence with lots of talk (and gestures) about killing people, but no gore. Some scenes involve assassinations and include references to genocide. Aladeen brandishes weapons, and there's a scene in which instruments of torture are discussed at length for their effectiveness. Aladeen is ruthless and quick to order the death of those who have failed him, but not all of his orders are carried out.

Believe it or not, there is a bit of a life lesson amid The Dictator's crude content, rampant stereotyping, and all-around wackiness -- basically, that you shouldn't write anyone off entirely, because in rare cases, there may be hope for even the people who seem the most extreme.

Lamborghini, Exxon, BP, Rolex, Polaroid, and a few other brands/labels are name-dropped or shown.

People drink champagne and other cocktails and liquor at parties. Some smoking shown.