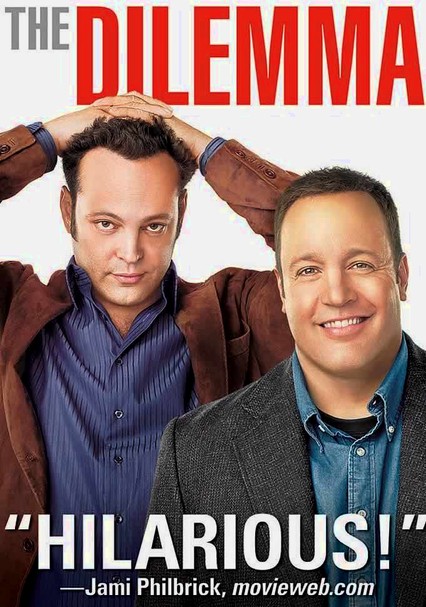 2011 PG-13 1h 52m Blu-ray / DVD
Friends and business partners Ronny and Nick are about to land a fantastic deal when Ronny learns Nick's wife may be having an affair. As Ronny turns amateur sleuth, he learns that telling a friend the truth is even more difficult than concealing it.

Parents need to know that this Ron Howard-directed buddy comedy starring Vince Vaughn and Kevin James takes a serious swerve pretty quickly, delving into the subject of infidelity and how it wrecks a marriage. As such, it's probably too heavy for tweens and younger teens. You can also expect some crass moments in Vaughn's riffs (including one about "doing tricks"), making out, and sexual innuendo. Language is fairly salty, including one use of "f--k" (plus "s--t," "a--hole," and more), and there's some drinking. All of that said, the movie ultimately has a positive message about the importance of honesty in good friendships and marriages.

References to "doing tricks," "happy ending" massages, and other sexual innuendoes. A couple makes out in a public place. The plot centers around an affair.

A man hits another with a baseball bat. He also brandishes a gun, point-blank, at the other. A man sucker-punches another, drawing blood. Characters scream at each other.

Although much of the movie revolves around issues related to infidelity, ultimately the message is that good friendships are based on honesty, as are solid, long-standing marriages.

Allusions to drug use, though viewers see nothing. A man talks about being high on Oxycontin. Lots of social drinking, including beer, wine, and champagne.