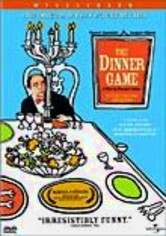 1998 PG-13 1h 21m DVD
Writer-director Francis Veber's clever comedy shadows a group of French intellectuals who gather each Wednesday night for a dinner game, in which the challenge is to bring along the most idiotic guest. Pierre (Thierry Lhermitte) thinks he's found a ringer in François (Jacques Villeret), a civil servant whose passion is making architectural models out of matchsticks. But Pierre gets more than he bargained for when François becomes his houseguest.