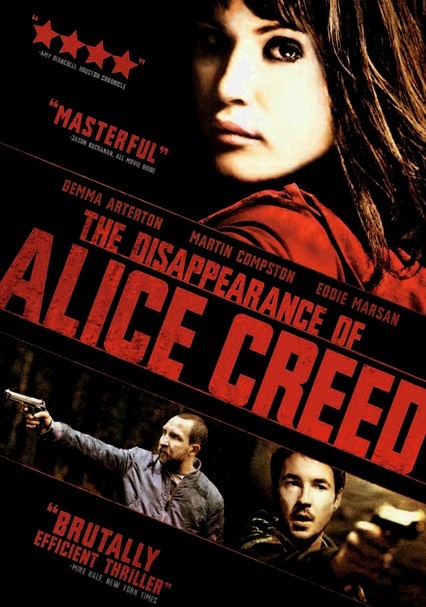 Parents need to know that The Disappearance of Alice Creed is a darkly violent kidnapping thriller that features some violence toward women (mostly slapping and rough handling), as well as guns and some spattering blood. There is some brief nudity (female frontal and male rear), and very frequent use of "f--k." Mature, older teens and parents will find some enjoyable thrills here, but younger folks should stay away.

Alice Creed's breasts are on view for a short time while the men change her clothes. They also change their clothes, and their naked buttocks are on view. There is a scene of seduction between a man and woman, and some sex talk having to do with two male partners.

Two men kidnap a woman, treating her roughly, threatening her, and occasionally slapping her. They strip her and dress her in a new set of clothes (a track suit). They inject her with sleeping drugs. There are also guns, and shots fired with spurts of blood, and a vomiting sequence.

"F--k" is used in just about every other sentence. Other words include "s--t" and "piss."

The entire movie is centered around a kidnapping, an act performed with violence for the illegal accumulation of wealth. The characters are greedy and cruel, but even further, they are often dishonest with one another, manipulating each other for selfish reasons. Some of the characters face consequences for their actions, but no lessons are learned.

One character enjoys a beer, while another scolds him for it. The kidnappers inject their victim with a sleeping drug.