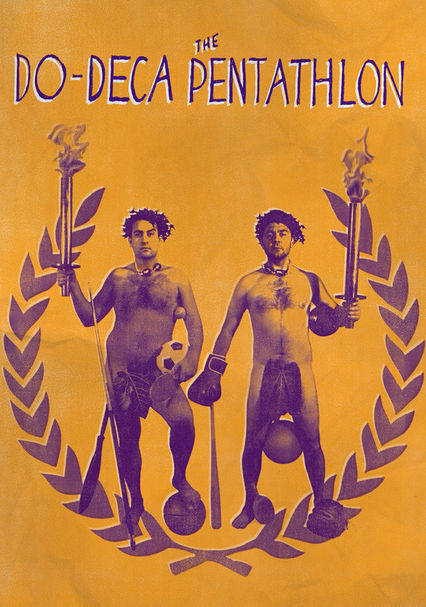 2012 R 1h 16m Blu-ray / DVD
Two brothers resurrect a two-person, 25-event "Olympics" (whose sports include pool and ping-pong) from their childhood for a family reunion. The silly competition may have been cute when they were kids, but now it's driving people away.

Parents need to know that The Do-Deca-Pentathlon is an independent dramedy from filmmaking brothers Jay and Mark Duplass. The biggest issue is language, with more than a dozen uses of "f--k," plus "s--t" and other words, some of which are heard in front of, or from, a pre-teen boy. Characters argue and fight; the main character throws a few angry, raging fits, and there's a big fistfight. There's no real sex, but a husband and wife are comfortable and affectionate with each other, and one character is briefly seen in a strip club (no nudity). Characters occasionally drink or smoke cigarettes. The movie is more likely to appeal to grown-ups, though fans of the Duplass brothers will certainly want to see it.

The main character is married, and he's shown being affectionate and comfortable with his wife. They kiss once or twice, and she sits with him in the bathroom while he takes a bath (no graphic nudity shown). The other major character is briefly seen in a strip club talking to a stripper, but there's no nudity.

Two brothers have a fistfight, with pushing and wrestling. Characters also argue a great deal, and in a few scenes, the main character explodes into fits of rage and anger. There are also some somewhat tense events in the competition, such as a fierce arm-wrestling match.

After years of fighting and competing, brothers learn to set aside their differences and love each other. This brings the rest of the family closer as well.

Slurpees are shown and mentioned.

Adults occasionally drink beer. The main character takes prescription medication (presumably for depression). His wife sneaks off to smoke a cigarette in one scene.