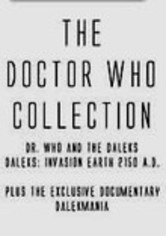 1965 NR 3 discs
This exciting collection -- which contains the feature films Dr. Who and the Daleks and Daleks' Invasion Earth: 2150 A.D. (both starring the legendary Peter Cushing) -- is a must-see for sci-fi buffs and fans of the original 1960s British TV series. The set also includes a special documentary, Dalekmania, commemorating the 30th anniversary of both films