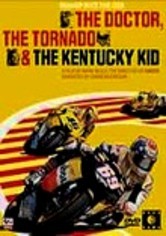 2006 NR 2 discs
Narrated by actor and motorcycle buff Ewan McGregor, this high-octane documentary features electrifying coverage of the biggest bike race in American history: the 2005 Red Bull U.S. Grand Prix in Laguna Seca, Calif. With a throng of rowdy fans cheering them on, the competitors take to the track for 32 laps of full-throttle action. Director Mark Neale captures all the thrills and spills of the monumental event, which was 13 years in the making.