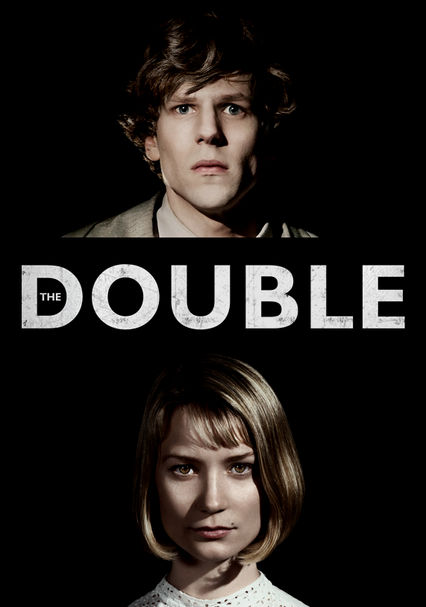 2013 R 1h 33m Blu-ray / DVD
Jesse Eisenberg plays the dual roles of a timid office worker and his charismatic doppelganger in this cinematic adaptation of a Dostoevsky tale. First spotted on the bus, then at work, Simon's double may share his looks, but he's no carbon copy.

Parents need to know that The Double (based on a story by Fyodor Dostoyevsky) is a dark comedy seemingly set in a fairly bleak alternate universe. Language is strong, with several uses of "f--k," notably in a tirade toward the end of the movie. "S--t," "ass," and other words are also used. There are also several images of violence, such as suicide (with pools of blood) and fighting, and knives and guns are shown. One character is shown to be a promiscuous lover, seducing several women, and although no nudity or sex acts are actually shown, sex is heard. Adult characters drink alcohol socially in two scenes. The movie may catch on with some teens the way that Terry Gilliam's Brazil (1985) once did, as a kind of cult classic.

One of the main characters is shown to be a promiscuous serial seducer. It's implied that he has had sex with several female characters. One sex act is heard but not seen. No nudity or sexual situations are actually shown.

A man commits suicide by jumping off a roof. A puddle of blood is shown. The main character is shown beaten up, with some bleeding cuts. In a bar, a man punches another man in the face. A pigeon smacks into a window, and its dead body is shown (with a little blood). A character holds a knife to another character's throat, leaving a small, bloody cut. A hospital attendant shows the main character his gun. A cheesy sci-fi TV show features characters wielding space guns of some kind.

The Double takes place in a dystopian society -- possibly futuristic, perhaps an alternate timeline -- with old-fashioned technology. It presents an opportunity to discuss the similarities to and differences from today's society. Likewise, it allows the option to talk about the idea of a "double," or different sides of one personality represented as two separate people. Otherwise, the movie takes place in a world that seems rather hopeless and in which suicide is a common practice.

Adult characters are seen drinking socially in a bar. A character orders a beer in a diner.