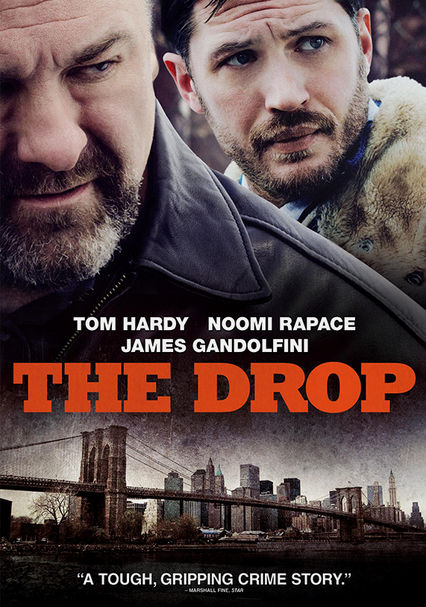 2014 R 1h 46m Blu-ray / DVD
Ex-con Bob Saginowski resolves to start a new life away from crime, but his bartending job at a local tavern pulls him back toward trouble when the load of cash that gangsters are laundering through the bar mysteriously disappears.

Parents need to know that The Drop is a crime drama taken from a story by author Dennis Lehane that stars Tom Hardy (Bane in The Dark Knight Rises). It's violent, with brutal slayings, spatters, and sprays of blood, plus an all-around sense of menace. Even a dog is found in a trash can with blood in its fur. Language is also strong, with many uses of "f--k" and "s--t." There's a romantic subplot, but sex isn't an issue; the relationship remains platonic through almost all of the movie. Much of the movie takes place in a bar, so there's a lot of social and casual drinking, though not really to excess. There's also regular cigarette smoking. This is a fairly grown-up story, so teens likely won't be too interested unless they're die-hard Hardy fans.

There's a romantic subplot, but it remains platonic for almost the whole movie.

A couple of brutal shootings, with spurting blood and dead bodies. A minor character is tortured in the back of a van with a huge bolt screwed through his ankle; there's a huge pool of dripping blood. A bloody, severed arm is found in a bag of money. A man deliberately runs over another man in his car, several times. Fights lead to bloody cuts and bruises; threatening situations. A female character has scars on her neck that she made herself; she explains that she did it with a peeler while she was on drugs. A puppy is found in a garbage can, with blood all over its fur; he's rescued and turns out just fine.

Characters get away with all kinds of threats and violence with no consequences. This neighborhood dispenses its own brand of justice, and everyone works for the mob without much choice in the matter. A woman decides it's OK to go on a date with a cold-blooded killer.

An opening montage has a rather obvious shot of some Nike shoes. Many brand names of beer and other alcoholic drinks are mentioned and/or shown in the bar's day-to-day business.

Quite a bit of drinking by bar patrons, as well as a few beers shared socially, but no one ever seems to have a drinking problem. A supporting character is shown smoking cigarettes on a regular basis. Harder drugs are mentioned and/or discussed.