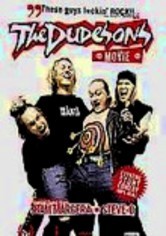 2006 NR 1h 40m DVD
In the tradition of "Jackass," this quartet of masochistic Finnish daredevils will do anything for a laugh. Join "Daredevil" Jarppi, "Showman" Jukka, "Mastermind" Jarno and "Bonebreaker" HP as they participate in outrageous (and painful) exploits. The mishaps include acting as a human dartboard and enduring a wake-up call involving a baseball bat between the legs."Jackass" vets Bam Margera and Steve-O make special guest appearances.

Parents need to know that this DVD release compilation of the Finnish reality show's violent exploits is a non-stop succession of brutal pranks performed as entertainment. Imitating them could lead to serious injury and/or death. As a result, this DVD is not recommended for kids and younger teens, and parents should exercise caution when allowing older teens to watch, too. Parents should also know that the show includes brief nudity and sexualizes women. In one instance, the guys catch a couple in the act of having sex in a barn. The only upside to all of this is that the guys truly seem to care for each other (although they still attack each other violently).

The guys catch a couple having sex in a barn. More often than not, women are shown in bikinis or topless.

Real-life violence including shooting someone with riot bullets, crashing cars, and throwing darts at someone's stomach.

The guys are loyal to one another, but still attack each other violently.