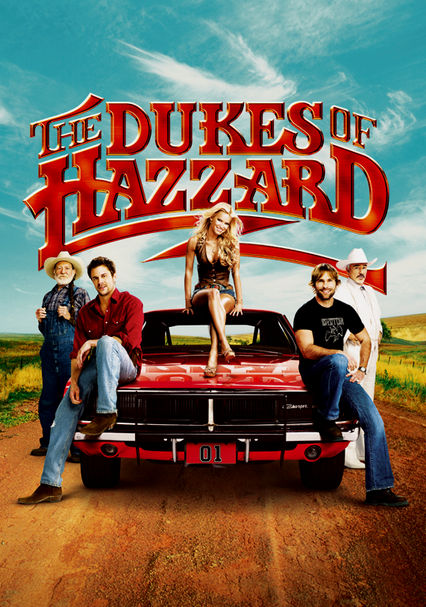 2005 UR 1h 47m DVD
The Duke boys are back in this comedy based on the TV series, following Bo and Luke as they tear around Hazzard County making trouble in the General Lee. The boys and cousin Daisy must stop Boss Hogg and Sheriff Roscoe from taking the family farm.

Parents need to know that this film includes frequent sexual slang and antics, jokes about drugs, beer, and moonshine, commercial references (particularly to beer brands), rowdy language (especially various uses of "ass" and "s--t"), raucous bar fights (a billiard ball hits a man's crotch), and long, loud car chases punctuated by flips, hard landings, and collisions. Men shoot shotguns and flaming/exploding arrows; though, for all the mayhem, only vehicles and buildings are destroyed, no visible deaths. One cousin regularly chases after girls, the other makes lusty references to his car; Daisy (of short shorts fame) displays cleavage. The car (named the General Lee) features a Confederate flag on its roof, eliciting responses pro (yay from good ol' boys) and con (boo from a group of African-American men ). Also be aware that the closing credits outtakes feature more coarse language and imagery. (The unrated version also includes topless women.)

Some making out and scantily clad women, sexual double entendres, and references to past sexual encounters. The unrated version includes lots of topless women.

Lots of strong language, like "s--t" and "ass" (though, per PG-13 guidelines, only one "f--k"). Sexist remarks and racial slurs are the base of much of the humor. Bo has the confederate flag painted on top of his car.

Somewhere behind the sex, violence and language, there is a subtle message of sticking by your family.

The Dukes are a moonshine-brewing family. People drink alcohol and there is mention of a fast car reflecting a "cheetah on cocaine." In the final scene old Uncle Jesse is caught smoking pot behind the barn.