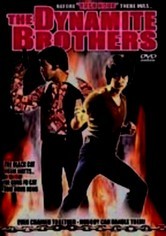 1974 NR 1h 36m DVD
It's action all the way from the ghettos of L.A. to the streets of San Francisco's Chinatown as Larry Chin and Stud Brown blast apart the secrets of the syndicate. Gang fights featuring automatic weapons and an attack on the desert castle of the big drug boss create explosive action in this power-punched film!